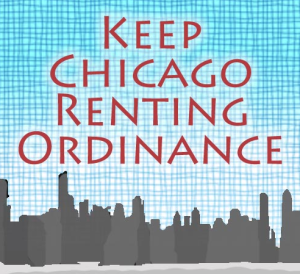 Stephen G. Daday and Aaron White are defending a case brought by the occupants of a foreclosed rental property in Chicago based on an alleged violation of the recently adopted Keep Chicago Renting Ordinance.

The Keep Chicago Renting Ordinance was adopted in 2013 to attempt to assist tenants in foreclosed rental properties in Chicago by providing a menu of options for lenders and to prevent lenders from evicting tenants who may be unaware that the unit in the building that they were leasing was in foreclosure.

The centerpiece of the ordinance is a provision designed to incentivize lenders to either renew or extend leases for twelve months or pay an exorbitant relocation assistance fee of $10,600.00 to tenants holding bona fide leases. However, if a lender elects to renew or extend the leases, the rent that could be charged for such rental is limited to 102% of the existing lease rate.

The Plaintiff alleged that the lender failed to renew the lease or offer the relocation assistance fee.

Daday and White filed a motion to dismiss contending that the ordinance was preempted by the Illinois Rent Control Preemption Act and therefore the case should be dismissed.

Judge Raymond Mitchell of the Circuit Court of Cook County agreed, finding that the Keep Chicago Renting Ordinance regulated the amount of rent that a landlord could charge for rental of foreclosed properties and was preempted by the Illinois Rent Control Preemption Act. Judge Mitchell entered an order of dismissal of the case with prejudice.