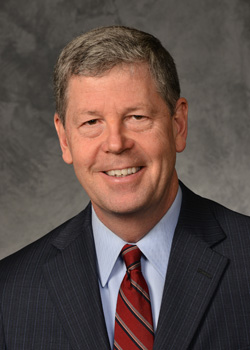 STEPHEN G. DADAY joined Klein, Daday, Aretos & O’Donoghue, LLC as a partner in 1987. Upon joining KDAO, Mr. Daday established the civil litigation and mortgage foreclosure departments.    Mr. Daday concentrates his practice in civil litigation including actions on behalf of creditors and mortgage foreclosures, labor relations and employment, zoning, eminent domain, and condominium law, and forcible entry and detainer.  Mr. Daday practices in both state and federal court and is admitted to practice in the State of Illinois and the United States District Court for the Northern District of Illinois.

Mr. Daday earned his Bachelor of Arts degree in Government and International Relations from the University of Notre Dame in 1977 and earned his Juris Doctor from The John Marshall Law School in 1980.

Outside of the firm, Mr. Daday is the President of the Northwest Suburban Bar Association Foundation Board of Directors.  He previously served as an elected Trustee for the Village of Arlington Heights from 1989 until 2005 and as a member of the Advisory Commission on O’Hare Noise.  He is a member of the Notre Dame Club of Chicago and served as a director from 2000 to 2003.  He is active as a volunteer at the Our Lady of the Angels Mission monthly food pantry in Chicago and as a youth basketball coach at Our Lady of the Wayside School and the St. Viator High School Feeder basketball program, both in Arlington Heights.